Sales Inspiration from an Unlikely Source 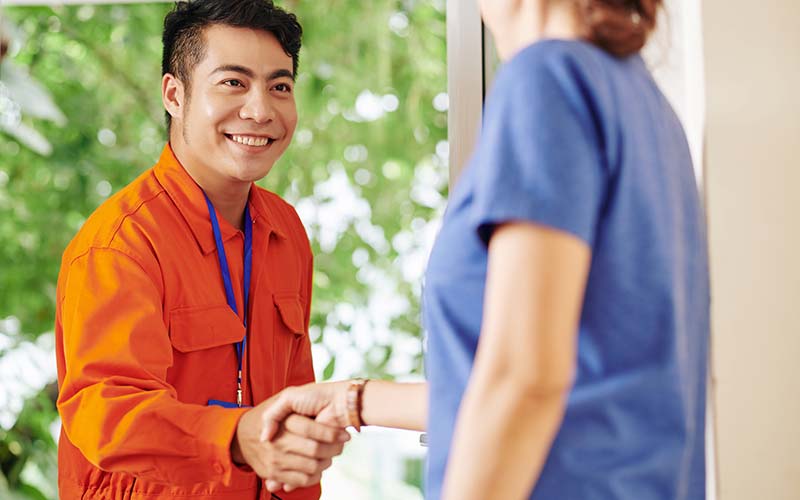 When the doorbell rings, I don’t even flinch. It’s usually one of my kids’ friends, so I let them answer it. I’m immune to the ding-dong sound.

But on Wednesday afternoon, I was the only one around, so I answered the door. Standing before me was something I had not experienced in a long time: a door-to-door salesman.

I kid you not. A door-to-door salesman. In the middle of a pandemic. Plus, it was a chilly day, and he was standing in a light rain.

The salesman was polite, and he stood about seven feet back from my door to make sure he was social distancing. He was clean-cut, probably in his early twenties, and he was selling security systems.

I immediately threw out an objection: “I already have a security system.”

His rebuttal focused on exterior cameras.

I objected again. “I already have exterior cameras,” I said, motioning toward the one mounted under the eave pointed right at him.

He rebutted again. Then I interrupted him: “I’ll be totally honest with you. There’s really no chance I’m going to be your customer, but I have to tell you something. I really admire you. It takes a lot of guts to sell door-to-door during a pandemic. I’m a salesman myself, and you have my respect.”

I wished him luck. He thanked me and amicably moved on to the neighbor’s house.

Wow! I wasn’t just trying to make him feel good when I said I admired him. It was true. I was genuinely impressed.

One of the reasons why he impressed me so much is that I work with many higher-level, more advanced selling professionals who are showing a lot less chutzpah during this pandemic.

Frankly, I’m tired of sales professionals using the pandemic as an excuse not to go out and get new business. I’m not saying all reps are sitting on their hands and passively, “waiting it out” and “waiting for the dust to settle,” but a lot of them are.

During times of uncertainty, it’s important to keep your activity level high. Incoming calls will likely be lighter, a higher percentage of deals will fall through, and it will take clients longer to make decisions.

Just keep talking to new people and getting existing prospects to take little steps further. And be on the lookout for opportunity. Some sales reps are getting some deals only because of the pandemic.

Think of it as “but for” opportunity. In other words, what sales might you not make but for the crisis or but for the shutdown? If you’re creative, you just might find a ton of new business.